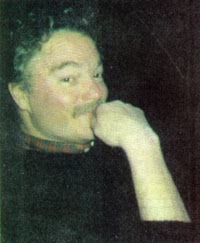 New London – Longtime patrons of the Dutch Tavern were saddened to hear Thursday that Peter T. Burgess of Sprague, who owned and operated the city landmark for more than two decades, died suddenly at The William W. Backus Hospital in Norwich. He was 52.

Burgess had been admitted to Backus on Wednesday morning with pneumonia, according to Peter Detmold, who bought the tavern from Burgess in 1998.

“It’s always been like a family (at the Dutch Tavern),” Detmold said. “We go to each other’s parties and each other’s weddings. . .and Pete has been like the big brother or the figurehead of this family for a lot of years. (His death) will affect a lot of people.

“I think the sadness of it is maybe that he was so young. It doesn’t even feel sad yet; it’s still too shocking.”

Burgess, who bought the Dutch Tavern from Edward Rothen and Louis “Wicky” Grabner Jr. in the 1970s, became a well-known figure in the city as a businessman, a patron of the arts, and a member of such city commissions as the Zoning Board of Appeals. The Dutch became the focal point of the city’s arts scene in the 1980s by offering performance space for both theatrical and literary gatherings.

Inside the Dutch, Burgess’ friends Thursday remembered the Navy veteran as a “wonderful and kind man” with a strong will and a “heart of gold” who, as Detmold said, “loved people.”

“In 1980, when I started (as a bartender) there were four 60-year-old guys in here, but when I finished in 1986, it was full of young people,” Deedy said. “(Peter and Emily) opened their hearts and minds to literature. Before we were serious, before we knew what we were doing as artists, we needed a chance to succeed or to fall flat on our faces and learn. This man, Peter Burgess, gave us the opportunity.”

Burgess was an avid Boston Red Sox fan. John Maynard, a former Dutch bartender and Tavern Player, talked baseball with Burgess this summer when the tavern sponsored a bus trip to see the Red Sox play the New York Mets at Shea Stadium.

“It seemed like it was going great after he got out of the Dutch,” Maynard said. “He seemed really relaxed and really like he was enjoying retirement. That’s why it’s such a shock.”

Burgess, sitting in the Dutch last fall, said one of his fondest memories was the night he gave up his ticket to the 1978 playoff game between the Yankees and Red Sox to watch the game at the tavern. The bar that night was so busy, he said, that people were watching it from outside on Green Street.
After that, Burgess said, he thought the ghost of Bucky Dent, the weak-hitting Yankee shortstop whose home run won the game, haunted the bar.

Burgess said that bar talk about baseball was one of the things that first inspired him to buy the tavern.

“Every guy, at some point, who is having a beer in an old bar dreams of being behind the bar telling people why things are the way they are,” he said. “Who doesn’t dream of leaning across the bar to tell you why the Giants are 2 and 12 or why the Yankees don’t have a chance.”

Burgess is survived by his wife, Terri, and his father, who lives in Florida. He was predeceased by a brother, Bob, and his first wife, Emily. The Byles Memorial Home is in charge of arrangements, which were incomplete Thursday.